A downloadable game for Windows and Linux

Rionon: The Search for the Stone Statue

Our story takes place in the nation of Rionon, a diverse world of lush forests, searing deserts, bitter winterlands, and majestic mountains. Waking up in the Southern Desert village of Corinth, our hero is a young boy named Joshua who dreams of escaping the poverty of his hardscrabble life. And today, he's going to get his chance...

The great pride and treasure of the people of Rionon is the Stone Statue, a relic from ages past both revered and worshiped by the citizens who believe it brings good fortune. The Statue sits reverently, it's watchful eyes of marble gazing out from in front of Priesas Turtas, the palatial home of the High Priest of Rionon in the opulent capital city of Urusalim.

For Rionon is a land of haves, and have nots, and you, young Joshua, are most certainly a have not. The down and out villagers of Corinth know not to try and rub elbows with the residents of Urusalim, save for perhaps those souls living in the capital's tenements neighborhood. The response of the people in the cultural hub of Laodicea, just north of your little hamlet, are barely different.

But perhaps all of that is about to change...

In what can only be described as a brazen move, one night the Statue went missing. The priests and soldiers searched far and wide, but to no avail. A pall fell over the nation as people lost all hope. And that's when the letters came. The priests, in a desperate attempt to find the Statue through any means possible have resorted to coming to your village looking for anyone who might be able bodied enough to search high and low for the Statue. The only lead they have to go on is a suspicion that a known cult, Pax Christi, is behind the disappearance. Find the Statue, and you will be showered with wealth beyond compare. Indeed, your entire village would finally gain the respect it deserves, and you? The admiration of the entire country. It's time to hunt down this dirty cult. But why would they even steal the Statue?

Inspired by the Bible.

Delving into issues of morality and choice, Rionon is inspired by the book of Acts in the New Testament, and features a large open world with dozens of characters. Will you make the choice to help yourself, help your nation, or help an old woman just trying to find her lost husband? Can you sort out right and wrong in a sea of confusion? Make your choice today, on PC, Linux, Mac, and Ouya!

Still not sure? Try the demo!

Rionon: Prologue takes place a few months before the events in The Search for the Stone Statue and introduces you to the village of Corinth and the surrounding region. In this prequel adventure you guide Joshua on an entirely new quest to find his sister Lilly's lost sheep before night falls and the wolves of Rionon come out! Can you save little Twinkles before it's too late?

In order to download this game you must purchase it at or above the minimum price of $5.99 USD. You will get access to the following files: 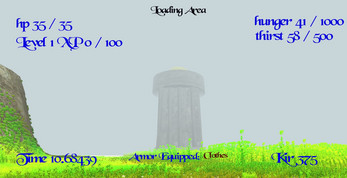